Tifereth Beth David Jerusalem Congregation (6519 Baily Road) in Côte Saint-Luc will continue with its free medical education series on Saturday, November 23 (7:30 pm) as member Dr. David Zukor leads an evening on the topic of orthopedics entitled My Bones and Joints Hurt: What Can I Do About It?

Dr. Zukor is the chief of Orthopedic Surgery at the Jewish General Hospital. His medical career has already spanned more than three decades. His specialization is hip and knee replacement. He will be joined by Dr. Ruth Chaytor, an assistant professor of surgery at McGill University and the chief of the foot and an

kle surgery for McGill. She established and is head of the diabetic foot clinic at the Jewish General Hospital, which currently cares for approximately 300 diabetic patients. She is also chief of surgical services at the  JGH.

The focus of the presentations will be broken down into two themes:  Hip and Knee Arthritis and Treatment and Common Foot Problems.  Like last year, some young TBDJ members presently in medical school will be part of the presentation: Rachel Szwimer, Med I (Supplements and other “Natural” Therapies/treatments for arthritis);   Jack Rudski, Med II (Plantar Fasciitis’) and Alexandra Cohen, Med III ( Injections for Arthritis).

Dr. Zukor is an orthopedic surgeon whose particular area of interest involves hip and knee arthritis, including both medical and surgical treatment. He has been chief of the Department of Orthopedic Surgery at the Jewish General Hospital since 1991, is an associate professor of surgery at McGill University and an active consultant at the Donald Berman Maimonides Geriatric Center. Born and raised here, he attended Hebrew Academy elementary and high school followed by a one year program at Hebrew University in Jerusalem.  He attended McGill University as an undergraduate and for Medical School, receiving his MD in 1976.  His residency training was at McGill followed by two years of fellowship at the University of Toronto. In addition to a busy clinical practice, he also is very involved in teaching and research.

Dr. Chaytor is a founding member and the Canadian representative on the International Working Group on the Diabetic Foot, passionate about establishing multidisciplinary clinics for diabetic foot care and reducing the current amputation rate in diabetics by 50  percent. In 2013, she was appointed Chief of Surgical Services of the Jewish General Hospital.   Dr. Chaytor grew up in St. John’s, Newfoundland and graduated with Bachelor of Medical Science and M.D. degrees from Memorial University of Newfoundland. She completed a rotating internship at The Montreal General Hospital, McGill University before returning to the east to complete an orthopaedic residency at Dalhousie University. She has a clinical trauma fellowship from Dalhousie, a foot and ankle fellowship from the University of Pittsburgh, and a prosthetics and orthotics fellowship from the University of Montreal. Returning to Montreal in 1995, she initially worked at Notre Dame Hospital and the Université de  Montréal, before moving to the Jewish General Hospital and McGill University in 1997.

There will be a question and answer period at the conclusion of the event.

Last year’s event focused on cardiology and attracted a standing room only audience. 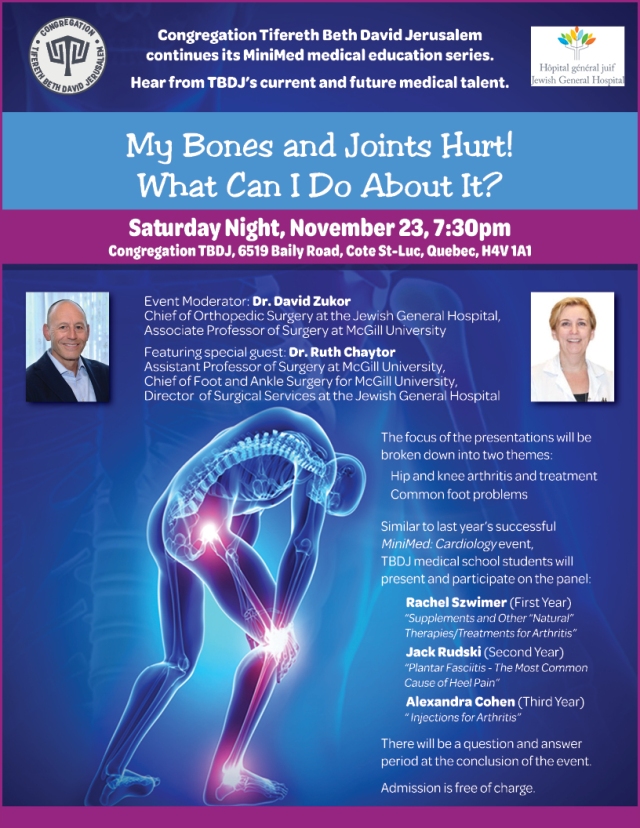